The ethical movement has taken the world by storm, bleeding into several industries – including the diamond industry. If you’ve been trying to find an ethical alternative to a mined diamond – whether it’s to align with your partner’s preferences or yours – you can rejoice! Now that there are more options to choose from, finding an ethical diamond won’t be like finding a needle in a haystack – in fact, you’re bound to be spoilt for choice! If you’re not sure how to kickstart your ethical diamond ring hunting, we’ve gathered everything you will need to know before taking the next exciting step. 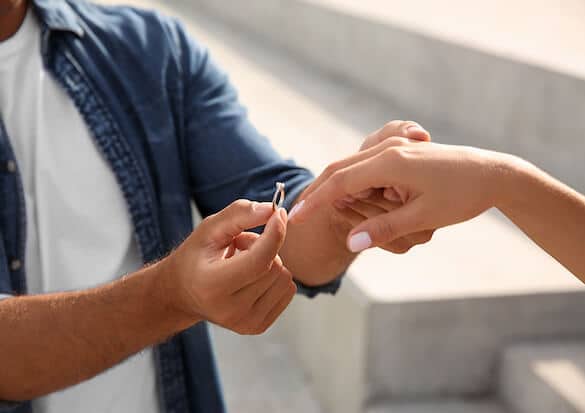 Saying No To Conflict Diamonds

If you haven’t seen the 2006 film, Blood Diamond, you may not be aware of the horrors that go behind the mining and procurement of a mined diamond. Otherwise known as conflict diamonds, these are diamonds that have been illegally traded to fund conflict in war-torn areas. The procurement of mined diamonds is riddled with corruption and violence, often at the expense of the workers who have to cope with dangerous and hazardous working conditions.

Fortunately, positive changes have been made since then. In 2000, over 70 countries, alongside the United Nations, European Union and the World Diamond Council, had taken a stance against blood diamonds. They’ve agreed upon an organisation that’s aimed to encourage the production and purchase of ethical sourced or “conflict-free diamonds”, otherwise known as the Kimberley Process.

Established in 2003, the Kimberley Process is a multilateral trade regime that aims to prevent the flow of conflict diamonds by implementing safeguards on shipments of rough diamonds and certifying them as conflict-free. By doing so, it has effectively curbed 99.8% of the global production of conflict diamonds. By extension, it has also helped create jobs, save lives, and support governments in areas ridden by armed rebellions funded by conflict-diamond trading.

Whilst it has no doubt done an excellent job in bringing down the crime rates, upon further investigation, it has been discovered that the members of the Kimberley Process have been continuing unethical practices that have largely gone under the radar due to lax political will. The organisation has also been criticised for its lack of transparency.

Undoubtedly, the Kimberley Process has brought about a positive change to the industry, but there is still so much left to be desired.

If you’ve been diamond shopping, you may come across traditional mined diamond retailers promoting “conflict-free” diamonds. Whilst this may sound amazing – which it is, no doubt – the sad reality is that there is no way to vouch for their claims. Tracking a diamond’s origins, from its procurement all the way to one’s jewellery collection, is an undertaking that’s almost impossible to do.

In diamond production, there are several stages that a raw diamond has to undergo before it becomes the scintillating beauty that we all know and love. These raw diamonds are first procured as a batch, and later transported to be cut and polished. They will be moved once again to be graded individually and possibly transported multiple times before they arrive at jewellery ateliers and their display cabinets.

As you can see, the process is not a straightforward one. Compounded by the fact that they come from all regions of the world – from Canada to Russia to Botswana – it is hard to make sure that such “conflict-free” mined diamonds are truly conflict-free.

If you’re not quite sure how to discern a conflict-free mined diamond or simply do not wish to go through the hassle, you can always consider the safe alternative: lab grown diamonds. These diamonds are produced in labs that mimic the geological environment that encourages the formation of a diamond underground. This high-tech process leaves no space for unethical practices, giving you and your partner the peace of mind with your purchase.

That said, it’s important to obtain your lab grown diamonds from a reputable source. Some ateliers will claim to be genuinely conflict-free by using lab-grown centre diamonds, but in actual fact, will use mined diamonds for the accent diamonds. As such, be sure to do your due diligence and research before prematurely settling with any lab grown diamond jewellery.

The benefits of lab grown diamonds extend beyond mere ethical and moral grounds. On top of being conflict-free, lab grown diamonds are also environmentally sustainable. Since its procurement does not involve any mining activities, this translates to no displacement of the Earth nor irresponsible releasing of harmful waste material into the environment!

With all these perks, one would naturally assume that lab grown diamonds cost just as much, or perhaps even more, than their mined counterparts. But on the contrary, this is simply not the case! Since their procurement and development process bypass the traditional long supply chain, these gems have a lower price point – 40% less, to be exact. This means you can either get a better quality diamond in terms of the 4Cs diamond grading, or purchase a bigger rock.

At Star Carat, we take pride in offering an extensive collection of lab grown diamonds that are not just stunning, but also of high-quality – these IGI-certified diamonds are also categorised as TypeIIA diamonds, a classification reserved for only the top 2% global diamonds. If you wish to revel in a gorgeous, show-stopping diamond proposal ring that ticks your ethical, environmental and budget checkboxes, we can help! Book an appointment with us to jumpstart your search for a swoon-worthy diamond.

This website uses cookies to improve your experience while you navigate through the website. Out of these cookies, the cookies that are categorized as necessary are stored on your browser as they are essential for the working of basic functionalities of the website. We also use third-party cookies that help us analyze and understand how you use this website. These cookies will be stored in your browser only with your consent. You also have the option to opt-out of these cookies. But opting out of some of these cookies may have an effect on your browsing experience.
Necessary Always Enabled
Necessary cookies are absolutely essential for the website to function properly. This category only includes cookies that ensures basic functionalities and security features of the website. These cookies do not store any personal information.
Non-necessary
Any cookies that may not be particularly necessary for the website to function and is used specifically to collect user personal data via analytics, ads, other embedded contents are termed as non-necessary cookies. It is mandatory to procure user consent prior to running these cookies on your website.
SAVE & ACCEPT